Facebook-f Linkedin-in Twitter Instagram
Global manufacturing and supply chains continue to feel the impact of the novel coronavirus (Covid-19) epidemic as factories and logistics providers seeking to resume operations now face labor shortages and regulatory uncertainty. The outbreak has now claimed over 1,300 lives and more than 60,000 cases have been reported worldwide.

While companies are preparing contingency plans for production, continued supply and logistics services to deal with this complex and rapidly changing situation, the crisis now appears to be disrupting global supply chains until April and possibly beyond. While the production-related challenges can be overcome in the coming weeks, limited inbound and outbound freight capacity in March and April could become the biggest obstacle to supply chain normalization.

To help supply chain managers keep abreast of the situation and initiate risk mitigation plans, our colleagues at Resilience360 have outlined the ten key challenges that companies must prepare for in the short and medium term amid the ongoing coronavirus (Covid-19) outbreak.

1. Shutdowns cause work and supply bottlenecks in the factories

Citywide closures and quarantines have led to work and supply shortages as Chinese authorities from different areas of responsibility try to contain the outbreak of coronavirus (Covid-19). 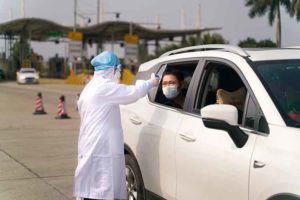 Varying degrees of citywide restrictions such as house quarantines, temperature controls and vehicle inspections have hindered the ability of workers to reach the factories, causing serious labor shortages. In more serious cases, some cities – most notably Wuhan in the center of the Coronavirus (Covid-19) epidemic – have introduced “sealed management” initiatives that have led to residential areas being sealed off, limiting workers’ ability to return to work.

Travel restrictions and the resulting labor shortages have created backlogs in many ports as iron and steel mills and mines in the inland provinces struggle to move key resources – such as zinc, copper, aluminum and sulfuric acid – from their refineries to supply raw materials.

2. Regulatory uncertainty slows down the resumption of factory operations

Another major challenge for manufacturers based in China is the extent to which they have to deal with different – and sometimes contradictory – regulatory requirements, which can vary at provincial, municipal and even district level as companies attempt to resume industrial operations.

Production has already resumed for companies in most provinces of China after the government delayed the resumption of normal operations to contain the virus outbreak. However, some jurisdictions, particularly at the municipal and district levels, have established different production plans and requirements for resuming normal operations.

At district level, several local authorities have either “encouraged” or “recommended” all companies to postpone the resumption of their operations, particularly in the southern production belt of Guangdong province.

3. Public health requirements have an impact on industrial operations

In anticipation of the return of the companies to normal operations, some authorities have also imposed additional conditions requiring the factories to apply for permission to reopen or to meet certain standards to prevent corona viruses. This list of requirements that local companies must meet in order to obtain a permit to resume production includes (1) the establishment of a prevention and control protocol, (2) the quarantine of non-native and/or immigrant workers, (3) the provision of protective equipment for all workers, (4) the performance of routine temperature controls and disinfection and (5) the provision of protective equipment such as masks, gloves, temperature guns, disinfectants, etc. However, it remains unclear how quickly these requests can be processed, although some districts claim to be able to approve them within 24 hours.

The lack of clarity in the approval process has already had a major impact on manufacturers who want to resume operations.

In addition to production stoppages and order delays, companies dealing with suppliers in China will face legal “force majeure” clauses that will be invoked in the event of non-performance, protecting these suppliers from legal and financial liability. “Force majeure” refers to unexpected external circumstances that prevent one party from fulfilling its obligations, typically natural disasters. While “force majeure” clauses rarely mention diseases, they often provide relief from unforeseen governmental actions that may qualify for governmental decommissioning.

A Chinese agency for the promotion of international trade has reportedly begun issuing “force majeure” certificates to more than 100 companies that are unable to meet their contractual obligations due to the coronavirus (Covid-19) outbreak. Legal experts noted that while these certificates carry considerable weight and are recognized by companies, trade associations and customs officials in more than 200 locations around the world, they do not preclude further negotiations or even litigation.

5. Border controls at the provinces aggravate the shortage of trucks

Inter-provincial trucking remains a challenge throughout China, as authorities require drivers to remain in self quarantine for 14 days, depending on the license plate of the truck and the registered province of the driver, in order to contain the spread of the coronavirus (Covid-19). In particular, trucks with license plates from Hubei province, where Wuhan is located, were stopped at the provincial borders and ordered to return to their provinces. In recent days, there have also been reports of trucks with license plates from other provinces such as Zhejiang and Jiangxi being turned away.

These developments have led to delays and a sharp increase in the price of truck journeys.

6. Closed borders delay traffic to and from Vietnam and Hong Kong

Since 11 February, cross-border traffic between Vietnam and the Chinese provinces of Yunnan and Guangxi has continued to be severely disrupted. Especially export goods from Vietnam are congested at the borders, as trucks cannot easily reach China. Waiting times for trucks at the largest border crossing on the Vietnamese side average 4-5 days.

In Hong Kong, the authorities have begun to quarantine all Chinese citizens entering the area from 8 February onwards for 14 days in order to drastically reduce the number of travellers in Hong Kong. Cross-border truck drivers have so far been exempted from this measure, and cross-border deliveries are still possible, albeit with advance notice.

7. Labour shortages cause congestion at airports and seaports

Since only limited truck capacities are available, the congestion of air freight terminals and warehouses has increased. This is due to incoming consignments that were either not cleared by customs agents or for which delivery and collection services could not be organised. As a result, freight operations have slowed down; delays in shipments (including critical shipments of medical equipment) and demurrage costs are also beginning to make themselves felt.

The situation is particularly acute in the airport warehouses in Shanghai, which may force logistics companies to stop accepting cargo destined for the area or to accept it only against a guarantee that it will be collected immediately. Gateways such as Hong Kong have so far not reported any congestion and could serve as an alternative entry point into the southern and central provinces of China.

Shipping companies have announced extensive empty runs of their ships. Empty runs refer to the situation where a shipowner cancels a planned stop in a particular port or an entire route for a particular ship, usually due to low demand.

By March, approximately 82 transpacific departures had been cancelled, resulting in the withdrawal of approximately 198,500 TEU from the market, while the shipping companies cancelled a total of approximately 54 departures for the trade between Asia and Europe, according to Sea-Intelligence Maritime Consulting. According to some shippers, a delay of three to four weeks can be expected for the arrival of containers at European destinations.

It is also expected that the large number of cancellations of passenger and cargo flights in conjunction with the resumption of factory and logistics operations in the coming weeks will lead to a shortage of airfreight capacity, which could continue until April. In total, more than 25,000 flights per week have been cancelled to date, reducing airfreight capacity by approximately 50%. In addition, Emirates Airlines reportedly cancelled cargo aircraft from Guangzhou to Dubai by 27 March, while Etihad cancelled cargo aircraft from Shanghai to Mumbai and Chennai by 30 March. The expected capacity crisis could lead to a 300-400 percent increase in air freight rates, according to The Load Star.

Given the limited air freight capacity, outbound freight trains from China to Europe have received more attention. While this option is generally twice as fast as ocean shipping, the capacity problems have also affected this mode of transport, as several scheduled trains have been cancelled and containers left over from the pre-moon period have priority. In addition, the difficulty of transporting freight by lorry across the provinces to major stations such as Chengdu, Xi’an and Zhengzhou could lead to timetable adjustments, thereby reducing the visibility of potential arrival times at European destinations, including Hamburg, Duisburg and Tilburg.

The outbreak of the coronavirus (Covid-19) also had a major impact on industrial production and global supply chains that extend beyond China’s borders.

For the automotive sector, a supply shortage of key car parts caused by the outbreak has led some major car manufacturers to temporarily suspend operations at domestic factories in South Korea (Hyundai Motors, Ssangyong Motors and Kia Motors) and Japan (Nissan) as they seek supplies either from China or from alternative markets.

In addition, the coronavirus (Covid-19) has had a disruptive impact on global pharmaceutical supply chains. Given the current public health crisis, China may be inclined to retain supplies of materials for certain antibiotics and therefore export less to alternative markets, including the US and India, which rely on China for such critical ingredients.

Although it remains difficult to predict how the outbreak will develop, especially when it reaches its peak, the authorities have indicated that drastic measures to contain the outbreak should be avoided as far as possible due to its significant economic impact. Reports suggest that production and logistics processes within China could reach some form of normality around the beginning of March, although logistics capacity and rates for shipments to and from China are unlikely to return to normal before April. Given the ongoing situation and the enormous operational and financial impact in several industries, it may take several months to assess the impact of the event on an organisation’s bottom line.

Click here for more information on the 10 biggest risks in the supply chain from the outbreak of Coronavirus Covid-19.