Facebook-f Linkedin-in Twitter Instagram
Logistics and the supply chain are still burdened with paper documents at many points. Consignor and consignee; number, marks and numbers of the freight items, gross weight, type of packaging or instructions for customs and other official handling of the goods. Anyone transporting goods from A to B has to send along a whole load of waybills with information on the goods being transported – in triplicate, of course, and a fourth copy remains with the sender. What follows en route is a series of signatures and confirmations and, at the end, a six-year obligation to archive the documents. Yet digital processing of transport orders has already been possible for over ten years – at least in theory.

The digital waybill still faces legal obstacles both in Germany and in other European countries. Technically, however, it has long been feasible. If freight transport were to switch completely to this electronic form, annual savings in the triple-digit millions could be achieved in Germany alone. Last but not least, the environment would also benefit from paper savings. Despite all these advantages, the widespread introduction of the e-CMR in Germany and Europe is still a long time coming.

The idea of the consignment note

In Germany, the Commercial Code regulates the information that the carrier can request when issuing the consignment note. In international road freight transport, a CMR consignment note is required. CMR is the abbreviation for the French “Convention relative au contrat de transport international de marchandises par route”, more information can be found here in our logistics lexicon.

The idea of the waybill is to make the transport of goods simple, but at the same time verifiable and legally secure. Although waybills create legal certainty, they do not simplify the processes – at least not in the analogous CMR. Usually, waybills have to be created with four copies. One copy remains with the sender, one is enclosed with the freight. The carrier receives the third copy, and the fourth is for customs or another authority.

Advantages of the digital waybill

Not only the creation of these analog documents, but also their distribution and archiving cost a lot of time and personnel. It is estimated that 4 euros are saved per waybill if digital CMRs are used instead of analog paper documents. With an estimated 150 million waybills to be issued each year, the potential savings in Germany alone would be 600 million euros.

The widespread introduction of an electronic consignment note also creates interfaces to other digital systems, so that the consignment note can be extended in any direction. In its electronic version, it is no longer an isolated document, but part of the digital documentation of a goods shipment. It also offers the possibility of documenting damage to the freight in real time. In the event of accidents or delays, it can be used to quickly provide replacements for the required supplies.

There are reasons for the hesitant introduction of the digital waybill 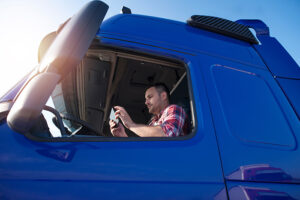 But the digital transmission of waybills in Europe between companies, governments and customs administrations has moved a step closer.

At the end of 2019, the European Parliament and the European Council agreed to make the use of digital waybills mandatory. This will come into force in 2026.

In addition to the legal hurdles, there are technical requirements that must be met for the e-waybill to prove its worth in practice. A simple PDF is not enough for this. It must be possible to process the e-CMR electronically, it must be readable by the customer, the recipient, the carrier and the authorities, and it must be able to prove its own authenticity.

The authenticity and accuracy of analog documents are traditionally certified by stamps. In the digital world, there are digital signatures (stamps), among other things, whose verification can be carried out by certification providers.

The digital processing of transport orders has already been possible for some time, and yet paperless dispatching is nowhere near as widespread as it should be. Again, the reasons for this are the legal obstacles facing the digital waybill both in Germany and in other European countries.

There is further potential in logistics

The possibilities for increasing the efficiency of transports using the example of digital waybills are only a small part of the opportunities offered by paperless logistics. Those who banish paper from their daily lives save money on physical and human resources while reducing their environmental footprint. Creating transparency using location-based digital tools can make the transition more organic, if not easier.

Companies can start by identifying which documents are most likely to be digitized. These include warehouse and shipping documents, as well as customer-facing paperwork such as invoices, statements and receipts.

Ways to eliminate dependence on paper

Companies would be well advised to take steps as soon as possible to reduce paper and eventually move away from it altogether. There are now many solutions available to manage orders more efficiently and store all necessary information securely digitally.

Here are some ways companies can save paper immediately:

This not only reduces paper consumption, but also simplifies and speeds up the invoicing process.

The financial impact is not negligible

The capital cost of office supplies such as ink cartridges can be drastically reduced, and these small cartridges are very expensive, as you probably know.

Additional upgrades or replacements for expensive office equipment such as copiers and fax machines can also be reduced. Going paperless does require an initial investment, but the savings will pay for themselves in a short period of time.

Paperless logistics saves staff, costs and a lot of time. Instead of waiting for the widespread introduction of electronic waybills, digital freight forwarders are leading the way and already offer the option of handling all documents required for waybills completely digitally. Thanks to the app, this also works easily on the road. Even in international transport, the relevant papers (CMR) can already be available digitally, at least in some countries. The digital waybill is just one example of how the still widespread paperwork is already unnecessary today and how even traditional freight forwarders should switch to paperless transports as soon as possible.