Facebook-f Linkedin-in Twitter Instagram
Average prices in European road freight transport increased by 1.6 per cent in Q1 2021 compared to the previous year. This is according to a study by the market research company Transport Intelligence (TI). Compared to the last quarter of 2020, the average rate increased by 0.5 per cent.

In their “Road Freight Rate Development Benchmark“, TI analysts determined that the average European route rate in the first three months of the year was 1118 euros. The price index used in the report is calculated on the basis of around 250 million prices and rates in Europe.

According to the report, prices rose despite the lack of economic recovery in Europe. The further wave of the coronavirus COVID-19 pandemic earlier this year and the associated restrictions dampened consumer demand in Europe. However, the transport sector benefited from growing demand for European products in China and the United States. In addition, the disruption of supply chains led to significant price increases in all sectors, including road freight.

The average price per kilometre in Europe was €1.57 in Q1 this year, 0.2 per cent higher than in the last quarter of 2020 and 0.8 per cent higher than in the same period last year. Analysing the main European routes, the experts found that rates on the main routes fell by 0.8 per cent to €1.72/km, while they rose by 1.3 per cent to €1.42/km for the return leg. According to the experts, the data prove that the economy is recovering from the pandemic crisis. This is indicated by the greater demand for return transport – this was not the case at the height of the pandemic, with many trucks returning empty at the time.

Supply chain disruptions due to Brexit

In the first quarter of this year, the effects of Brexit were also clearly felt. New conditions at the UK/EU border caused UK exports to the EU to fall by 40 per cent in January compared to the 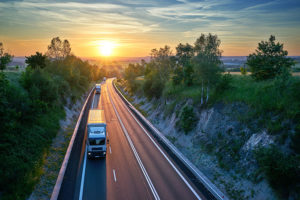 previous year (according to the UK statistics office ONS); imports from the continent to the island also fell by almost 29 per cent. New bureaucratic requirements, customs clearance at the border, restrictive measures against COVID-19 and congestion at the border have caused many transport companies to abandon transport to the UK. And reduced availability of transport has led to higher rates. Rates on routes to the UK increased 1.3 per cent quarter-on-quarter and as much as 5 per cent year-on-year in January-March 2021.

On the Duisburg-Warsaw route, which was used as a sample route in the study, the average price in Q1 2021 was €1.02/km, an increase of 8.0 per cent compared to Q4 2020. On the return route from Warsaw, however, prices fell by 4.9 per cent to €0.98/km in the last quarter. The first quarter of this year was the first time in history that the average rate on the route to Poland was higher than that from Poland to Germany.

TI analysts suggest that this could be due to the very restrictive COVID-19 regulations in the German state of North Rhine-Westphalia, which at the time dampened demand for products and therefore also for transport services. In addition, they explain, consumption levels in Poland remained high, and since 40 per cent of Polish imports from Germany are consumer goods, this boosted imports from across the Oder. Although imports of semi-finished products and raw materials from Poland are important for booming German industry, the pandemic restrictions and higher consumer demand in Poland tipped the balance in Poland’s favour. 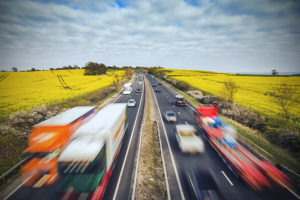 There were also significant price increases on the Duisburg-Prague route. The increase here compared to the previous year was 9.8 per cent and compared to the previous quarter 8.0 per cent. The period between January and March 2021 was the first in history in which the average price on this route was over 1,000 euros. Here, too, the main reason for the increases was the high consumer demand for German products in the Czech Republic.

Price reductions between France and Germany

At the other end of the scale is the route connecting the industrial regions of Germany and France. Compared to the previous year, rates fell by 2.9 per cent between Duisburg and Lille and by 4 per cent on the way back to Germany. TI attributes the decline to the strict pandemic restrictions in both countries and the problems of the French industry, which is only slowly recovering from the pandemic-related slump. In addition, trade between the two territories has traditionally mainly involved car parts, and this segment has suffered greatly from the pandemic.

In contrast, there were high price increases on the Madrid-Paris route. Rates towards France increased by 7.3 per cent year-on-year and by almost 8.0 per cent compared to Q4 2020, due to the pandemic-related restrictions on the French side and the harsh winter on the Iberian Peninsula, which made transport more difficult.

Overall, TI analysts predict in their road transport rate forecast that by the end of 2021 the average freight rate in Europe could be between €1087 and even €1155. These would be increases of 2.5 per cent and 9.0 per cent respectively compared to the previous year. The rate per kilometre could therefore be between €1.6 and even €1.7.

Key findings of the study